On Tuesday our group of students for our Winterim term arrived and started classes on Wednesday!

At SAIIE we believe in what we praise: “Your Education; Your Life Education” and the way that our Winterim program has been structured is a good example of it.

All students this Winter are taking the ART 3700 Artistic Monuments of Sevilla, Córdoba and Granada course that we offer in English.

This course is designed for students that, in a short space of time, want to get to know Andalucia´s diverse culture through the monuments of its three main cities: Seville, Córdoba and Granada. It offers an incredible trip through time that will transport students all the way from Arabic mosques and palaces to Christian churches and cathedrals, whilst also experiencing typically Spanish expressions of culture. The city itself is used as the main classroom or textbook for this course, as the students will visit different places every day that have made these cities so crucial to Spanish history and art.

This week we took our students to visit Plaza España to get their first taste of the huge variety of ancient architecture that the beautiful city of Seville can offer and showed them, and they cannot find anywhere else.

The Plaza de España is a plaza in the Maria Luisa Park, in Seville, Spain, built in 1928 for the Ibero-American Exposition of 1929. It is a landmark example of the Regionalism Architecture, mixing elements of the Renaissance Revival and Moorish Revival (Neo-Mudéjar) styles of Spanish architecture.

The Plaza de España has been used as a filming location, including scenes for the 1962 film Lawrence of Arabia. The building was used as a location in the Star Wars movie seriesStar Wars: Episode II – Attack of the Clones (2002) — in which it featured in exterior shots of the City of Theed on the Planet Naboo. It also featured in the 2012 film The Dictator.

Scene from the 1962 film Lawrence of Arabia 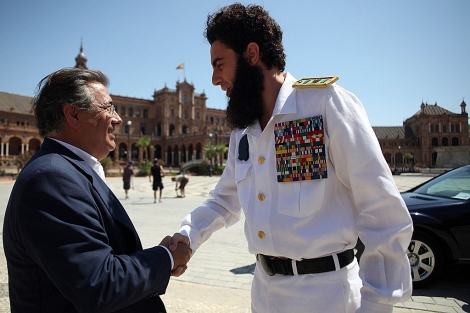 Scene from the 2012 film The Dictator